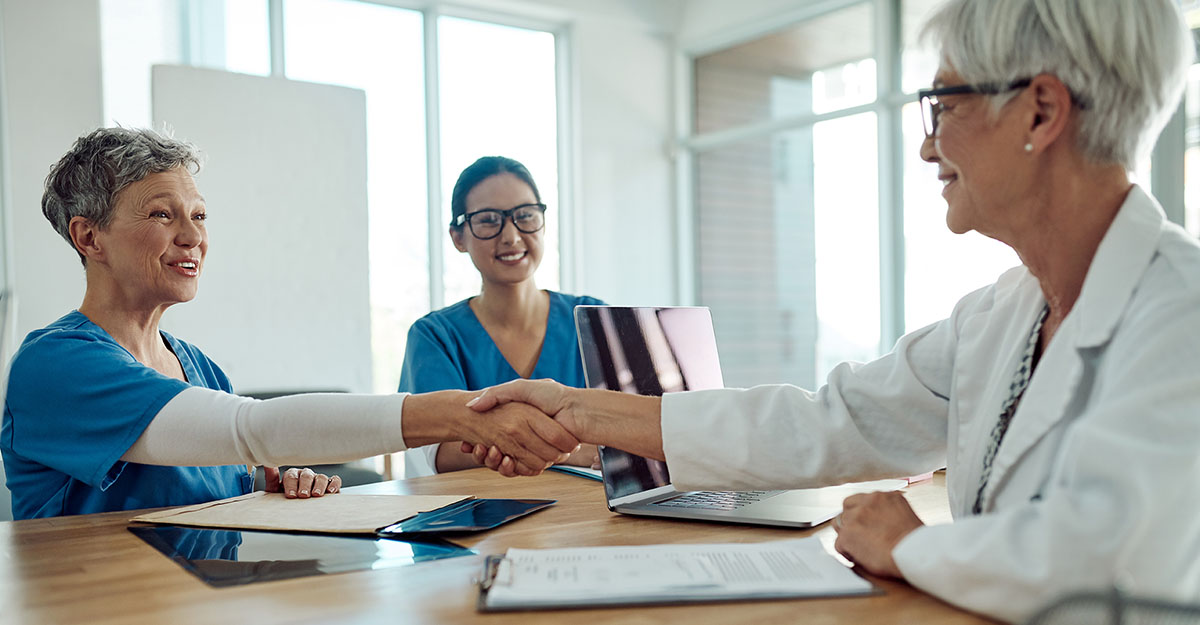 With the right motivation, making your return to nursing is within your reach.

Elizabeth Trevino had planned to take the NCLEX after finishing nursing school in 2004. But pregnant with her son, she started experiencing postpartum depression soon after the birth.

During the next several years, her plan to pursue nursing seemed increasingly elusive when she had another child and became a single mother after a divorce.

“I thought there was no way I could do 12-hour nursing shifts as a single parent, so I started working as a cook at a restaurant,” said Trevino, who lives in Seal Beach, Calif.

Trevino remarried in 2015 and began volunteering to shampoo patients’ hair on a medical-surgical unit at Los Alamitos Medical Center — an experience that fueled her desire to work in the clinical setting. She applied for a part-time position as a patient companion at Hoag Hospital Newport Beach in California, where she sat for hours with patients who were at risk of self-injury, falls or harm to others.

“I enjoyed seeing how nurses interacted with patients, and that really gave me the motivation to go back to nursing,” said Trevino, 40, who hoped to eventually work in an ICU. “I also had incredible support from my colleagues at Hoag.”

She knew the path would not be easy because she first needed to pass the NCLEX. She found the National Council of State Boards of Nursing’s online Learning Extension, which provided valuable test review apps. She studied for one year and passed the exam the second time.

To gain clinical skills, she found an RN refresher course listed on the California Board of Registered Nursing’s website, and she enrolled in the course offered by Azusa Pacific University. She finished the course in three months, but knew it would be difficult to land a position in an ICU without previous nursing experience.

Trevino was pleased when she learned Hoag was hiring new graduates in the ICU, so she introduced herself to the director of the unit. She landed the job and will soon begin her nursing career.

“I’m nervous because I will be in the ICU dealing with life and death situations, but I can’t wait to help as many people as possible,” said Trevino, BSN, RN. “I had to go through a lot of life before I became a nurse, and I’m excited to offer what I’ve learned to support my patients.”

Although a return to nursing requires diligence, courage and patience, nurses who have done it agree that their effort has more than paid off.

“Every day I feel so much more satisfied with my work now and I’m grateful to be doing a job I love,” said Trish Conway, BSN, RN, OCN, who worked in pharmaceutical sales for nearly 20 years before she made her return to nursing.

Now she is an infusion nurse at the Dana Farber/Brigham and Women’s Cancer Center in South Weymouth, Mass.

Demand for returning nurses will only increase in the coming years as baby boomers retire from their nursing positions and as the need for healthcare services increases among the growing older adult population in the U.S. Researchers project one million RNs will retire by 2030, and patient care settings that depend on RNs will face a significant loss of nursing knowledge and expertise.

Although the reasons for stepping away from the profession vary, one of the most common barriers nurses face as they contemplate their return to nursing is fear they have forgotten what they learned in nursing school, said Jennie Wagner, MSN, EdD, RN, CNE, an instructor in the refresher program at the University of North Carolina, Chapel Hill.

“But when they finish the theory and get into the clinical portion of the course, they build confidence, become autonomous and realize they bring a wealth of knowledge,” said Wagner.

Refresher courses typically require nurses to have passed the NCLEX before enrolling, and in North Carolina, former nurses wishing to return to nursing are required to complete a refresher course if their license expired five or more years ago, said Catherine Moore, PhD, RN, regulatory consultant and legislative liaison for the North Carolina Board of Nursing.

For those who have never taken the NCLEX, there is no time limit after graduation for taking the test or limit on the number of times they can take it in North Carolina, but the rules in each state vary, she said.

More than 3,400 nurses have completed the refresher course at UNC-Chapel Hill in the last 20 years, and the program coordinator works with participants to secure clinical placements that match a student’s previous experience and employment interests.

Meredith Hatt, BSN, RN, enrolled in the program in April 2018 after she had been away from nursing for 10 years. She had initially worked in med/surg and critical care nursing for seven years before deciding to stay home to raise her children. Once they were in middle school, she was eager to return to nursing at the bedside.

One of her concerns before starting the course was her ability to learn computer charting systems because she had used only paper charting methods before leaving the field a decade ago.

“It was a little overwhelming at first, but practicing made it easier,” she said.

She had always wanted to work in women’s health, and the refresher program coordinator secured a clinical placement for her on the labor and delivery unit at Atrium Health in Charlotte, N.C.  After completing 140 hours of online coursework and 160 hours of clinical training, she applied to re-activate her license.

The manager of the postpartum unit mentioned that they were looking to hire a night shift nurse, so Hatt applied and was offered the position.

“I am loving it,” she said. “It’s wonderful to utilize the knowledge I gained during nursing school to care for women after they have delivered babies.”

For Conway, the desire to return to nursing became acute one day when she realized she no longer had the motivation to continue making pharmaceutical sales cold calls.

“My sales territory had just changed again and a friend had been diagnosed with ovarian cancer, so this triggered me to want to do what I loved most,” Conway said.

Conway had initially left oncology nursing after three years because she was unhappy working nights, weekends and holidays, and she saw little chance of securing a day job because she was not interested in management positions. She had been impressed with the effectiveness of a new drug that could treat nausea for her oncology patients, so she started working in sales for the company that had developed the drug, GlaxoSmithKline.

“I made good money, had a company car and every holiday off, so it seemed like I had it all,” she said. “But over time, I realized that the incentive to make more money never motivated me.”

She had maintained an active nursing license throughout her career in sales, and she decided to enroll in a refresher course at Northeastern University. Although she had to take a significant pay cut once she made her return to nursing, she has no regrets about the career shift.

“I am motivated by helping people, and now I’m on the front lines doing that with oncology patients,” Conway said.

Take these courses to learn more about caring for patients and yourselves:

Document It Right: A Nurse’s Guide to Charting
(5.2 contact hrs)
Although documentation has always been an important part of nursing practice, the increasingly complex healthcare environment, litigious society and the diversity of settings in which patients receive care require that nurses pay more attention to documentation. This continuing education module outlines the importance of documentation, different formats and settings for documentation, and what nurses must document, including information about difficult situations.

A Quadruple Aim and Social Determinants of Health Conversation Starter
(1 contact hr)
It’s no secret that a well-rounded and strategic approach to providing healthcare includes providing treatment for health conditions while trying to prevent health issues that can be avoided. The IHI Triple aim addresses care, public health, and cost containment. Many organizations have added a fourth aim to address how to take care of healthcare workers specifically. Some may refer to the fourth as achieving joy, others as improving work-life balance, still others as overall well-being. Regardless, a quadruple aim and an emphasis on the factors in our environments that can improve health equip us with a strategic focus on improving the health of care organizations, healthcare workers, and the public.