The recent shortages of personal protective equipment (PPE) have stretched across the globe and have brought to light the important role these items play to workers that spend most of their time in hazardous conditions. PPE plays a vital role in keeping workers safe on the job site and should be available to those that clock in on the front lines during a global pandemic.

Wearing certain PPE has even spread to normal, everyday life, such as people going to the grocery stores, heading out to doctors appointments or even having to wear masks and other PPE for jobs that have been deemed essential during these tough times. Some states and areas of the country have even made wearing a mask (something as simple as a cloth mask) mandatory for leaving the house during the pandemic.

With PPE being one of the more valuable items during the pandemic, does it make you start to wonder the history of it and how it got to where it is today? Has PPE always been an essential item used in the workplace for safety? Let’s dive in and take a look.

The History of PPE 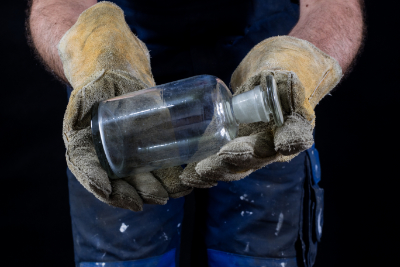 With something as essential as PPE, you would think that some form of it would have been used as early as time can remember. And in fact, the history of protective clothing, according to researchers, can be traced as far back as the eighth century B.C., where it was documented from an ancient Greek poem “Homers Odyssey.” In the poem, there is a brief description of someone using gloves to protect his hands from thorns as he worked away in his garden.

History shows that wearing gloves became not only a way to make a fashion statement for the wealthier class, but was also used by common workers while working in hazardous conditions or handling hazardous materials. For example, during the Middle Ages, masons would wear sheepskin gloves when handling dangerous materials.

Another historic form of protective equipment making its introduction was the helmet. When someone used a helmet back then, it was most commonly used in the military during combat. According to researchers, the oldest known use of this type of equipment was by Assyrian soldiers in 900 B.C., who wore thick leather or bronze helmets to protect their head from blunt objects, sword attacks and arrow strikes during combat. However, it wasn’t until around the 19th century that working people began to use headgear to keep their skulls safe from danger while working in hazardous conditions.

In the medical industry during the 1760s, gloves began being used during patient exams. Physicians would use obstetric gloves made from sheep intestines to protect both the patient and themselves. It wasn’t until the 1840s when Charles Goodyear patented his “vulcanized rubber that surgical gloves became flexible enough to wear and were used at Johns Hopkins Hospital in the 1890s.

By the early 1900s, surgical masks were constructed from cotton gauze and worn by surgery staff to prevent contamination of open surgical wounds. Around the same time, the first type of respirators were devised and were most commonly used to protect miners from dust and gas, soldiers from chemical warfare and firefighters from smoke.

PPE was originally invented, to protect the human body from harm. And in the medical industry, PPE goes a step further in not only protecting healthcare workers, but also providing a clean, sterile environment for patients in need of care. So, what are popular forms of PPE that you would see in a hospital today? And why is it so important, especially now, for healthcare workers to properly use PPE?

Proper Use of PPE 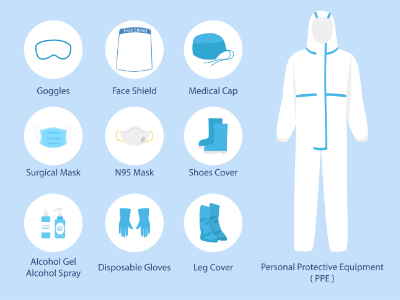 Personal protective equipment, according to the U.S. Food and Drug Administration, refers to the protective clothing, helmets, gloves, face shields, goggles, facemasks and/or respirators or other equipment designed to protect the wearer from injury or the spread of infection or illness. When used for its correctly intended purpose, PPE creates a barrier between infectious materials such as viral and bacterial contaminants and your body, such as your skin, mouth, nose or eyes. The contaminants from the body include blood, bodily fluids or respiratory secretions, and the PPE barrier has the potential to block their transmission.

While using PPE, it’s important that the wearers are properly removing and disposing contaminated PPE to prevent exposing both yourself and other people to possible infections and cross contamination. According to the FDA, all PPE that is intended for use as a medical device must follow and adhere to the FDA’s regulations. This includes surgical masks, N95 respirators, medical gloves and gowns.

The Centers for Disease Control and Prevention (CDC) have created guidelines that show the correct and proper sequence for putting on and disposing personal protective equipment. It’s vitally important to follow the guidelines to protect yourself, as well as those around you from contamination.

In our current global pandemic situation, many hospitals and medical facilities were running low on proper PPE and were forced to seek help from the federal government for more supplies. Many doctors and nurses took risks when coming into work everyday and not knowing if they would have the proper PPE to wear during their shifts. This dire situation prompted a couple of different companies and technicians around the country to search for a better resolution. So, is there a way to avoid a shortage of PPE in the future?

The Future of PPE

Many scientists, companies and entrepreneurs have stepped up to the plate during the pandemic to offer help with the shortage of PPE around the globe. Some are using PPE packaging materials that are usually discarded, and combined them with other hospital materials to produce additional protective wear. Others have utilized their crafting skills to create cloth masks, which aren’t necessarily used in the medical setting, but have helped slow the spread of the virus in other situations, such as people going to the grocery store.

With the shortage of PPE across the medical industry, people have been scrambling to create replacement masks and other protective wear, by using different materials, 3D printers and home sewing machines, to help improve and prolong the use of individual PPE. Companies are looking into creating reusable isolation gowns, patients’ gowns and scrubs as a way to help the situation in the future.

Although government regulators do not yet approve of these reusable and temporary PPE replacements, there may come a time in the future where this will be possible and it may help resolve the massive shortages that we are seeing today.

Personal protective equipment has come a long way since the earliest days of its conception, but it’s always had the same basic concept of keeping workers safe in hazardous conditions. Whether you’re ringing people up at the grocery store, fighting ongoing fires, or working on the front lines in a hospital full of COVID-19 patients, PPE is here to save your life and the lives around you. And future PPE plans can help benefit people in the long run, as well as be a sustainable alternative. So, whatever the case may be, just know that wearing your personal protective equipment has helped and continues to help save lives.