From an early age, you are taught one of the most essential lessons of hygiene – washing your hands. You are taught to wash your hands before you eat, after using the restroom, after playing outside in the dirt, after petting animals, and especially after blowing your nose, coughing or sneezing into your hands. When washing your hands, hopefully you are using soap and water, the two most vital ingredients for getting rid of germs and bacteria. But have you ever wondered when people started using soap? And what makes it so important to use?

Washing your hands with soap and water, according to the Centers for Disease Control and Prevention (CDC), can help you stay healthy and help prevent the spread of germs and bacteria. As a matter of fact, government officials have advocated that simple hand washing techniques during the recent global pandemic could help save lives. Here are a couple of fast facts straight from the CDC:

Washing your hands with soap and water, although it seems like a simple thing, proves to play an important role in maintaining a healthy life. So, before we get into the backstory of how soap came to be, let’s first talk about what soap is made of and why it combats bacteria and germs the way it does. 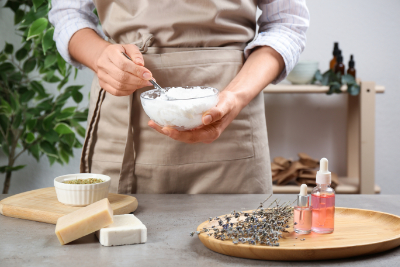 Although you would think soap would be made up of complex materials, it’s generally made up from a mixture of fat or oil, and alkali, or basic salt. These ingredients, combined with the right proportion, go through a chemical process called saponification, which will result in soap.

There are two different ways to create soap, which basically comes down to making it with either a cold process or a hot process. The cold process includes having a room-temperature lye solution mixed with animal or vegetable oil. As the ingredients react, the mixture thickens and heats up. Before the mixture becomes too thick, the mixture is poured into a mold where it solidifies into soap. The final step is to let the soap sit for a few weeks, which allows excess water to evaporate.

The hot process of making soap includes heating the ingredients up, which mixes and increases the saponification process. Once the soap is in a liquid form, it’s poured into molds and is ready once it has solidified.

When creating antibacterial soaps, additional ingredients such as triclosan or triclocarban are added to the mixture. These are hydrophobic molecules that can penetrate bacterial cell membranes and kill bacteria. So, how is this different from regular soaps? When using regular soaps, it removes the germs and bacteria from our hands, but doesn’t necessarily kill them.

Germs tend to stick to the oils and grease on our hands, and using water alone won’t remove them. However, due to the ingredients of soap, the soap molecules act as a type of surfactant, which means they act as a mediator between the water and oil molecules. So, when you rinse your hands off, the soap carries away the germs with the water. But who first used hand soap? And was it always used in the same way we use it today?

Why was Soap Created? 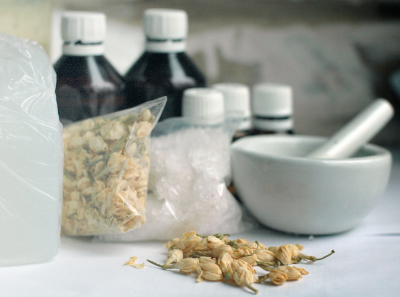 The basic recipe for soap hasn’t changed for thousands of years. In fact, the first people to make soap were said to be the ancient Babylonians back around 2800 B.C. The ingredients included animal fats, wood ash and water, which would have been poured into clay containers. Researchers believe that they likely used the mixture for washing wool and cotton so it could be woven into cloth, but the ingredients weren’t used much for cleaning their bodies.

The ancient Egyptians came along with a similar recipe and found that soap was good for treating sores, skin diseases and personal washing. The Romans also used soap for personal hygiene, but prior to that, they used it as a physicians’ tool for treating diseases.

Other ancient civilizations also used soap, or early forms of it. It’s believed that soap got its name from an ancient Roman legend about Mount Sapo. The legend has it that rain would wash down from the mountains, mixing with animal fat and ashes, and would create a clay mixture that residents found to make cleaning a little easier.

In countries such as Italy, Spain and France, soap making became an established art by the 7th century where they had a readily supply of ingredients, such oil from olive trees. In America, commercial soap making began in the early colonies around the 1600s, but for many years, creating soap was a household chore rather than a profession.

But soap is only as efficient as its user. Meaning, while using soap and washing your hands, you must thoroughly follow the proper guidelines to ensure that you are getting the job done right. So, let’s look into proper hand washing techniques.

Are You Using Soap Correctly? 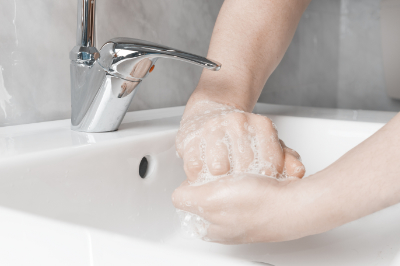 Hand washing, according to our CEUfast’s Infection Control and Barrier Precautions Course, is one of the most effective methods for preventing patient-to-patient, patient-to-staff, and staff-to-patient transmission of microorganisms, and is one of the foundations of infection control.

If you’ve ever questioned when you should wash your hands, here’s a go-to quick guide:

Washing your hands is easy, and as we’ve already discussed, should be something that you learn at an early age to help slow the spread of germs and other bacteria. In fact, hand washing is so easy that it can be done in five steps.

The CDC recommends these five steps for washing your hands:

While hand washing is very efficient, you may not always have access to a bathroom or a sink with soap and running water during the times you need it. During those times, the CDC recommends the use of alcohol-based hand cleansers. These alcohol-based hand rubs have been shown to be very effective, and in most cases, can be as effective as soap and water when it comes to fighting off germs and bacteria.

Although hand washing techniques have been around for a long time, you can never underestimate the power of using soap and water to effectively warn off harmful germs that may be lurking just beneath your nails. So the next time you’re in the bathroom and think about skipping washing your hands, think about all the people and lives you’ve saved by thoroughly washing your hands and not spreading harmful bacteria.