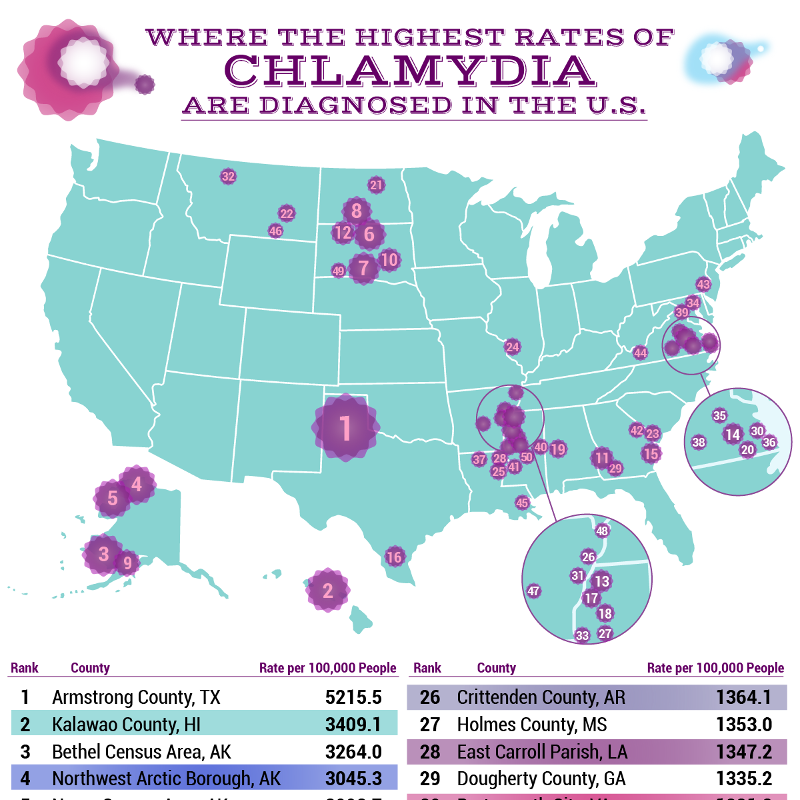 Where is the chlamydia diagnosis rate the highest in the United States? We mapped out the areas of the country that reported the highest rates of chlamydia diagnosed per 100,000 people using information that the CDC collects annually on sexually transmitted diseases within the population.

Using the most recent STD data collected by the CDC from 2018, we found the 50 counties across the U.S. that reported the highest rates of chlamydia diagnosis. All 50 of these counties had rates of well more than a thousand people diagnosed for every 100,000. Armstrong County in Texas was found to have a rate far higher than any of the other counties, at 5,215.5, which means that 5.2% of the county’s population was diagnosed with chlamydia in 2018. This high rate is nearly ten times the national average of 539.9 cases per 100,000.

What State Has the Highest Rate of Chlamydia?

The state that has the highest rate of chlamydia is Alaska, which had a chlamydia diagnosis rate of 833 per 100,000 people in 2018. Alaska was also found to have had the the highest rate of chlamydia in the United States since 2000, when their rate of diagnosis was half as much as their most recent tally at 409 per 100,000 people. Alaska saw a 64% increase in cases diagnosed between 2000 and 2006, which the state government believes is due to their increased screening efforts and improved system of reporting. With such a high rate of chlamydia being diagnosed in Alaska, it’s no surprise to find that four of the state’s counties made it into the top ten of the 50 counties across the U.S. with the highest chlamydia diagnosis rates.

We also mapped out the chlamydia diagnosis rates by state since 2000, with a focus on how much these rates changed every six years. The four maps represent the chlamydia diagnosis rate in each state during 2000, 2006, 2012, and 2018, which includes the most recent data available from the CDC. Which states saw the biggest increases over time? Between 2000 and 2006 is when we see the largest percent increase in chlamydia rates, presumably from states increasing their amount of testing and reporting on this disease, and Vermont’s increase during this time came out on top. Vermont’s rate went up by 123% over the six-year period, with New York following close behind with an increase of 115%. Between 2012 and 2018, the percent change in rate increases was noticeably smaller across the board, with Nevada having the biggest rate increase in the country at 44%. Over the course of these six years, some states even started to report a decrease in their rate of chlamydia diagnosis. West Virginia had the biggest win during this time, with a 23% decrease in their diagnosis rate.

While an increased rate of any sexually transmitted disease is not a good thing, it’s important to note that an increase in the numbers may indicate that state governments are using more resources to fight these diseases by increasing things like screenings, reporting, and STD education.

Nurse Salary By State: An In-Depth Guide for 2021