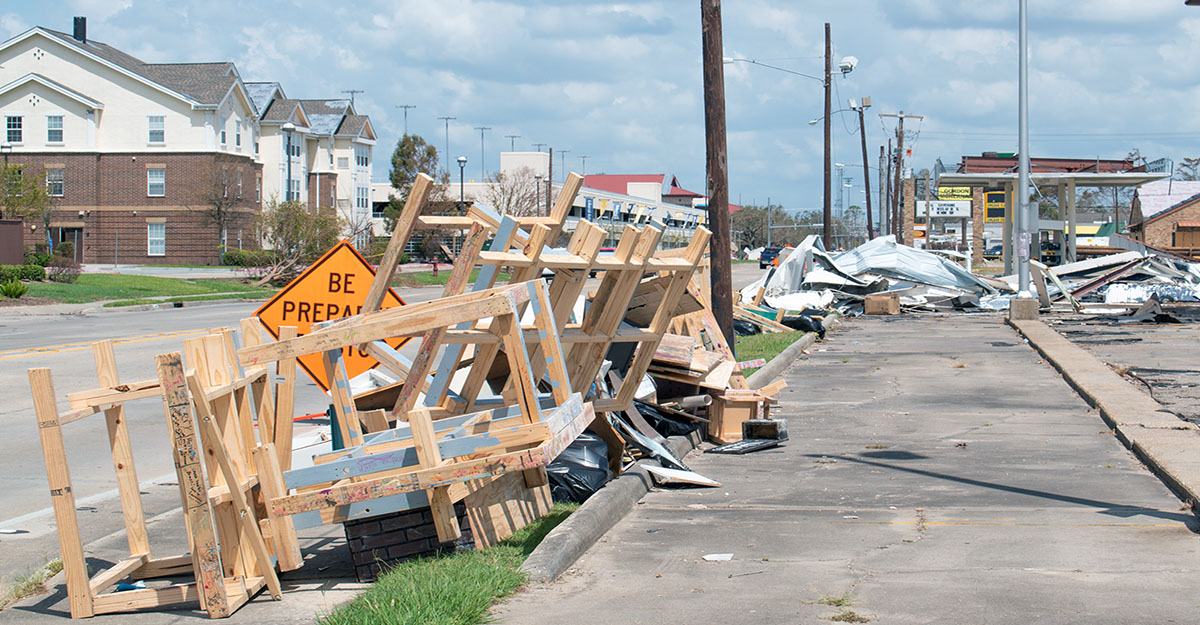 If 2020 hasn’t been difficult enough for nurses, add a Category 4 hurricane barreling toward a hospital. That is exactly what happened in the early morning hours of Thursday, Aug. 27, when Hurricane Laura hit Lake Charles, La., home of Lake Charles Memorial Hospital.

Hurricane Laura’s winds of up to 150 mph ravaged local power and water systems, leaving the hospital’s nurses scrambling to keep patients safe and wondering if they would survive the storm.

The plan for Lake Charles Memorial as the hurricane approached was to shelter in place. That is generally the go-to option for hospitals during a hurricane. In this case, it seemed logical given Hurricane Laura was supposed to be a Category 2 when it made landfall and the hospital is not in a flood zone, according to hospital media relations.

But Mother Nature is unpredictable, and the hurricane quickly strengthened and headed straight for Lake Charles.

“When it first started, the wind was blowing so hard that water was coming through parts of windows, so we had to move our patients away from the windows,” Vinson said. “We had some windows that were blowing out and had to move those patients to different rooms. We had to do horizontal evacuations, which we all learn about when we do our orientations. But you don’t know if you’re ever going to have to do it.”

Vinson said they could not flush toilets. Nurses would have to use bags to catch patients’ waste, while being as sanitary as possible.

Vinson’s staff donned street clothes the day after Hurricane Laura hit in order to stay cool and continue caring for and protecting patients.

Heat and shortness of breath were among the staff’s biggest concerns for cardiac patients on the floor. Nurses used fans to keep patients cool — especially patients on oxygen, according to Vinson.

Unfortunately, Vinson’s home didn’t make it through the storm. During his interview with Nurse.com, he was on his way to buy a camper to live in while his house is being rebuilt.

Rae Gardiner, MSN, RN-BC, OCN, the hospital’s Director of Nursing for Oncology, arrived at the hospital at around 7 a.m. the day before Laura hit and stayed through the evening after the storm, when staff were able to successfully evacuate patients on the oncology floor.

“We’re the designated oncology unit at the hospital, but we also manage a lot of med/surg patients, surgical patients, a variety of patients,” Gardiner said. “Throughout the storm, we had about 20 patients on our unit that we cared for as the winds ravaged the hospital and the rain came through the seams of the windows.”

The staff had little time to plan, but they did have a plan for not only managing patient acuity but also for keeping patients out of harm’s way. Staff moved patients closer to doors and communicated their plan to patients, including what they would do if the lights went out— which they did at 10 p.m. the night before Hurricane Laura made landfall.

Gardiner said nurses comforted patients throughout the process, even though nurses didn’t know what to expect in the very fluid situation.

The most difficult time for Gardiner happened when the storm intensified and rain started coming through windows. The nurses could hear the storm’s fury and feel the building’s walls moving. The building temperature had climbed to over 80 degrees, and there was no water.

“We made sure the environment was safe, as best we could, for our patients,” Gardiner said. “We found a bag of ice Friday morning that was still frosty, and we were able to divide it between all the patients. I think in that moment, those were the little things that the patients appreciated. We had constant contact with families, so that was nice that we never lost our phone services.”

Gardiner walked away from the ordeal feeling blessed about the strength of her team.

“There are a lot of brave nurses on our unit,” she said.

Nurses tried to sleep in empty patient rooms, but there was not much sleeping.

“Really, the nurses that worked Wednesday only slept probably about an hour and a half and then went back to work Thursday morning,” she said. “They were the same nurses that were there until Friday night at 8 p.m.”

“It took us probably close to 48 hours to evacuate an entire hospital,” Gardiner said.

Supporting and communicating with the team is key during a natural disaster. Leadership should help prepare nurses mentally with what they might experience and a plan, Gardiner said.

“Did we have breakdowns?” she asked. “Certainly, but in the blink of an eye they were back at what they do best, taking care of people.”

Looking after the babies

Rika Armentor, RNC, a staff nurse in Lake Charles Memorial’s neonatal intensive care unit started her shift before the storm by evacuating NICU patients. The unit was located in a building off campus to the main hospital campus — about a 15-minute ambulance ride away.

“Because of the predicted storm surge, at the last minute it was decided that we would evacuate our babies to the main campus,” Armentor said. “We went to the sixth floor, which is typically the pediatric floor and the PICU. There were no patients, so we took over that floor.”

The process went quickly. Ambulances arrived to transfer the babies within minutes of getting the OK to transfer.

“Once we got the final word that we are evacuating, it was all hands on,” Armentor said. “We had anesthesia come in and offer their help, respiratory, surgery, all these people that didn’t have patients and were in the building. … We packed up the whole unit, the babies, their equipment, their meds, the breast milk, their belongings. In less than two hours, we got everything and everybody moved across town.”

That was no easy task. The unit was almost at capacity with 19 babies. Several were on ventilators and another handful were on oxygen.

The winds started whipping and some water managed to make its way into the rooms, according to Armentor. Seeing pictures on their phones of buildings giving way in the storm worried the nurses. They put mattresses in front of the window shades for protection.

“Anything to protect the babies,” Armentor said. “It got hot and humid very quickly. The floors were sweating. We were sweating.”

The unit’s younger nurses hadn’t experienced working through a storm of this magnitude, but the team supported one another as Hurricane Laura wreaked havoc, and the babies made it through.

“Our practitioners worked hard, of course, trying to take care of the patients during the day and then work on transfer summaries, so that wherever the babies went, those people would know what all went on,” she said.

Take these courses to learn more about preparing for disasters:

Protecting Older Adults in Disasters: Nurses Matter
(1 contact hr)
Major disasters affect everyone, but the older adult population is particularly vulnerable to their devastating effects. Of the people who died in Hurricane Katrina in 2005, 50% were older than age 75. Those who survived experienced stressful and sometimes inappropriate displacement and often a significant decline in health and functioning. This module will inform nurses about how they can help protect the health and lives of older Americans who are faced with disaster.

RNs Shelter Victims of Disaster
(1 contact hr)
The Red Cross has thousands of volunteer nurses in hundreds of chapters across the United States, many of whom are involved in Disaster Health Services (DHS). But many more are needed to respond to future local and national disasters. In addition to the threat of man-made disasters, such as terrorist attacks, and natural disasters, such as fires, floods, and earthquakes, the focus of disaster preparation has grown to include emerging infectious diseases. This course will help nurses better understand the role of Red Cross nurses during major disasters and help nurses decide whether DHS nursing may be where they can best contribute their time and talents to help their fellow citizens.

When Disasters Strike: Preparing for the Unexpected
(1.5 contact hrs)
This module features an overview of disaster management in EDs, including the definition of the four stages of disaster management and the appropriate triage of patients. Preparation of ED personnel, such as RNs, EMTs, physicians, pharmacists, and technicians, will help them to respond to disasters and the patient populations affected by them more effectively.