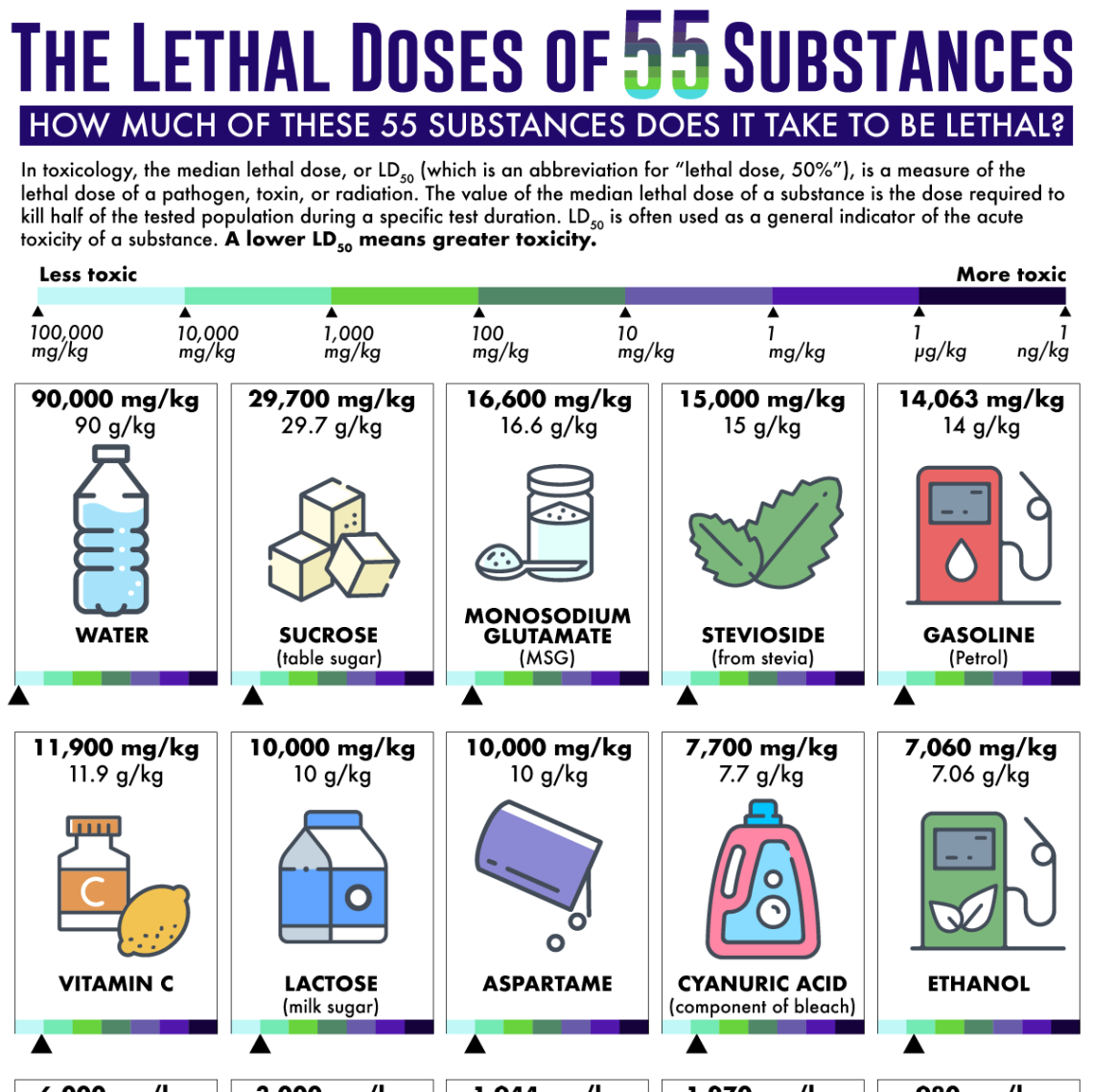 Is it possible to drink too much water? Can you die from eating too much sugar? How much aspirin is too much? One measure that scientists use to determine the answers to questions like these is the median lethal dose. In toxicology, the median lethal dose (LD50) is a measure of how much of a toxin, pathogen, or radiation is required to kill half of the members of the test population during a test duration window. This infographic from CEUFast.com provides the median lethal dose list of 55 drugs, chemicals, animal venoms, and other substances.

What Is the Most Deadly Poison?

The botulinum toxin is believed to be the most toxic poison known. It has a tiny median lethal dose — one nanogram per kilogram could be lethal to a human. Botulinum toxin is a neurotoxic (destructive to nerve tissue) protein that is produced by the bacterium Clostridium botulinum. Botulinum toxin is so dangerous because it prevents the release of the neurotransmitter acetylcholine from axon endings, which leads to flaccid paralysis. Infections caused by botulinum toxin are known as botulism. Botulism begins with blurred vision, weakness, fatigue, and difficulty forming words. Ultimately, it leads to paralysis that can persist for two to eight weeks; a ventilator may be needed to keep the individual breathing and alive. If treated, botulism has a fatality rate of 5% to 10%. If untreated, 40% to 50% of people who contract botulism die.

How Does Botulism Spread?

Botulism has multiple means of spreading. The bacterial spores may be found in soil or water, producing the botulinum toxin when exposed to low oxygen levels. It can also spread through food that has not been prepared properly, especially fermented and preserved foods made without adequate salt and acidity.

Botulism may also be contracted through the contamination of a wound with the bacteria, referred to as wound botulism. This is especially common with intravenous drug users who inject black tar heroin.

What Is Botox Made Of?

Despite the toxicity of the botulinum bacteria, it is the key ingredient for the most common cosmetic procedure: Botox. Botox works by blocking signals between nerves and muscles, forcing lines and wrinkles to relax. There have been many medical malpractice cases based on improper use of Botox, such as using too high of a dose or using it in areas that are not designated safe for the chemical. These medical malpractice cases often result in paralysis or permanent pain.

The tetanus toxin has the second lowest median lethal dose on this list. Tetanus is caused by a toxin created by spores of the bacterium Clostridium tetani. This bacterium is found within dust, soil, and animal species. When the spores enter a deep flesh wound (such as from stepping on a nail), the bacteria produce tetanospasmin, which impedes the nerves that control muscle movement. This leads to painful muscle contractions, especially in the jaw and neck (it is often called “lockjaw” for this reason). Seizures, spasms, and difficulty breathing develop. Even with intensive care, tetanus is believed to have a death rate of 10% to 20%. Fortunately, there is a vaccine available that provides immunity to tetanus.

This article was originally published by Ceufast.com. Read the original article here.

Brazil: At least 25 killed in Rio de Janeiro shoot-out
Be proud of your mouth: Taking care of your oral health can help you live a happier and healthier life
How To Write A Letter Of Interest + Effective Samples
An Unfair Policy Led to My Advocacy for All Nurses To Use Their Voices
I Hate My Job! Simple Tips For What To Do Next…