On Wednesday, August 24th President Biden announced that the federal government will forgive a minimum of  $10,000 in student loan debt and extend the pandemic forbearance on federal student loans to December 31st.

In an official tweet, President Biden stated that he was keeping one of his campaign promises by “giving working and middle class families breathing room as they prepare to resume federal student loan payments in January 2023.”

While there has only been a limited amount of information released so far, essentially only what was listed in the official tweet, there were some key elements of the forgiveness mentioned. The Biden’s Administration Student Loan Debt Plan is as follows:

To be eligible, your annual income must have fallen below $125,000 (for individuals) or $250,000 (for married couples or heads of households). According to the administration, this debt relief has the potential to help up to 43 million borrowers. It’s important to note that this loan forgiveness will only apply to undergraduate loans and does not apply to graduate degrees, medical school or law school debt.

“The potential of an extra $10,000 worth of forgiveness for some Pell Grant Recipients was unexpected, but it makes sense given that it directly targets lower income borrowers and runs contrary to the narrative that student loan forgiveness is a ‘handout to the rich,’ as some have argued,” Jacob Channel, senior economist at Student Loan Hero, said in a statement.

In addition to loan forgiveness and the extension, the administration hopes to make the student loan system more manageable for current and future borrowers. They are currently proposing a rule to create a new income-driven repayment plan that will substantially reduce future monthly payments for lower- and middle-income borrowers. Specifics according to Federal Student Aid include,

On March 27th, 2020 the original coronavirus relief bill, otherwise known as the CARES Act was signed into law by then-President Donald Trump which helped most federal student loan borrowers by temporarily pausing payments and involuntary collections on federally held student loans through Sept. 30, 2020. It was then extended several more times but the-President Trump.

On December 22nd, 2021, President Joe Biden announced that the last and final loan extension would be issued until May 1, 2022. The pause includes the following relief measures for eligible loans:

It seems that that was in fact not the final extension as it was just announced that this will be the LAST extension. This would give borrowers more time to prepare and save for repayment to restart. Once again, all student loans will maintain a 0% interest rate during this time. In total, it was extended seven times between the Trump and Biden administrations.

According to the Federal Student Aid (FSA) website, the administration will have an application available in the coming weeks for borrowers to provide their income information or if borrowers are unsure if the department has their income information already. Additionally, the FSA claims to already have 8 million borrowers’ financial income data available in their database which could expedite the relief process. However, for those whose information is not available, there may be significant delays.

“People who need the relief will end up not getting benefits because of paperwork delays, similar to public service loan forgiveness (PSLF) applicants experiencing problems with denials,” Katherine Lucas McKay, associate director of research at Aspen Institute’s Financial Security Program, said. “PSLF borrowers have to certify their income with the IRS, who then sends an automated notification to the Education Department of income based on current year tax return based on individual income.”

Lawmakers have had mixed reactions since the announcement.

“President Biden’s student loan socialism is a slap in the face to every family who sacrificed to save for college, every graduate who paid their debt, and every American who chose a certain career path or volunteered to serve in our Armed Forces in order to avoid taking on debt,” he said.

“By delivering historic targeted student debt relief to millions of borrowers, more working families will be able to meet their kitchen table needs as they recover from the pandemic,” she continued. 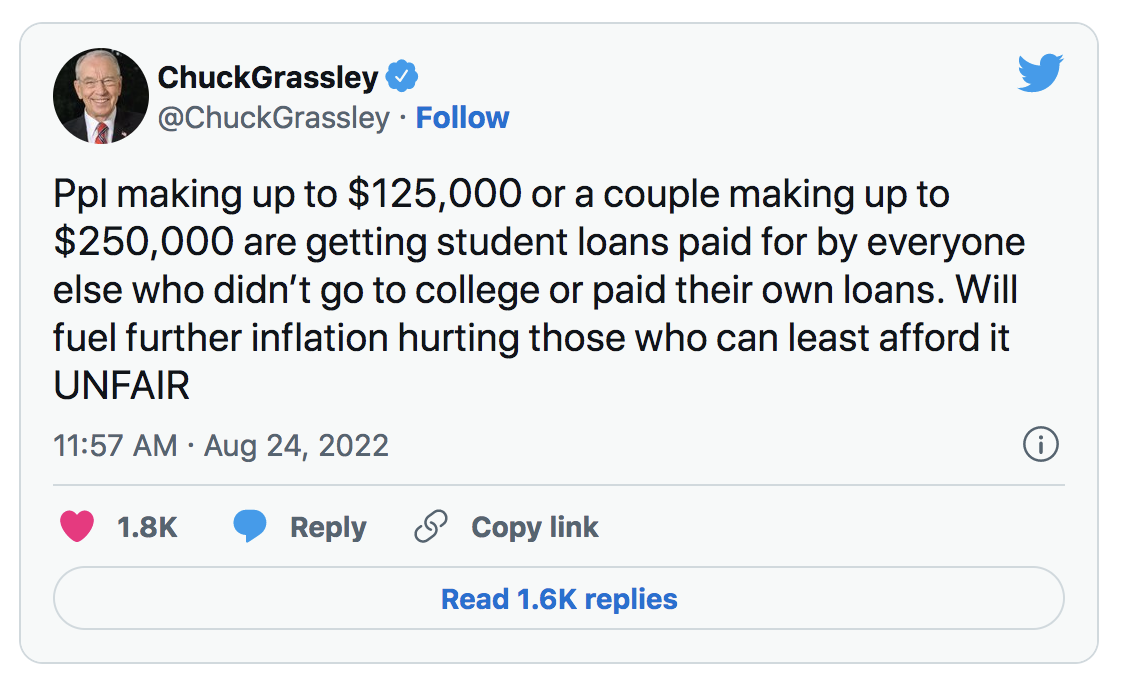 Borrowers can sign up for updates on when the application is open at the Department of Education’s subscriptions page.