WHO warns of nursing workforce ‘ticking timebomb’ in UK and Europe

Pressures on the nursing and healthcare workforce across Europe and the UK are so severe that the region is facing a “ticking timebomb”, a new report from the World Health Organization (WHO) has warned.

The international organisation has stressed that countries in Europe, including the UK, are facing a disastrous shortage of nurses and other healthcare staff unless they act now to train, recruit and retain the next generation of health workers.

The report follows recent figures which revealed the number of NHS nurse shortages in England has reached a record high of almost 47,000.

The new WHO report found that, on the whole, the UK lags behind many European countries in the total number of nurses available to care for the population.

The UK is also training fewer nurses than other countries, with 31 new nursing graduates per 100,000 people in 2018, compared to more than 40 new graduates a year per 100,000 in France, Sweden, Germany, Denmark and more than 70 in Norway, Finland and Romania.

In addition, more than 40% of doctors and nurses are over the age of 55 in 13 of the 44 European countries where data is available.

The proportion of nurses aged over 55 is higher in the UK (23%) than other European countries including France, Norway, Spain and the Netherlands, based on data from 2019.

Additional workforce must be recruited within the next 10 years to replace these staff when they retire, the report noted, while recognising the overall number of health workers needed in Europe will continue to climb as the population gets older and has more complex care needs.

The report concluded that European governments needed to invest more money in the workforce, and to invest it better. It recommends developing policies that protect the workforce by placing its interests and wellbeing at the centre of economic and social recovery from the pandemic.

WHO regional director for Europe Dr Hans Kluge warned: “All of these threats represent a ticking time bomb which, if not addressed, is likely to lead to poor health outcomes across the board, long waiting times for treatment, many preventable deaths, and potentially even health system collapse.

“The time to act on health and care workforce shortages is now.”

Chief executive of the International Council of Nurses (ICN) Howard Catton seconded the call for governments to take action to grow their nursing and healthcare workforce so that they can be self-sufficient in meeting their populations’ needs.

“This cannot wait. We need action now, not some five or ten-year plan that never comes to fruition,” he said.

Meanwhile, Royal College of Nursing general secretary and chief executive Pat Cullen, said the report highlights the crisis the UK faces, with too many nurses poised to retire and too few coming into the system.

“It finds a fifth of the UK’s nursing workforce is reaching retirement age and that the UK is churning out too few nursing graduates – less than the average for other European countries and less than half as many as Romania, Albania and Finland,” she said.

“Ministers across the UK must take note. Urgent investment in nursing must include fair pay and measures to boost the domestic workforce, such as funding tuition fees.” 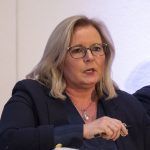 She added: “This report calls for nursing staff and other healthcare workers to be put at the centre of the economic and social recovery after the pandemic – fair pay is a simple way to recruit and retain nursing staff and keep patients safe.”

The WHO is recommending 10 actions to strengthen the health and care workforce.

These include more investment in workforce education, protecting the health and mental wellbeing of the workforce, and creating working conditions that promote a healthy work-life balance.

The Department of Health and Social Care was contacted for comment.