The government’s unwillingness to negotiate on pay “is a slap in the face” to nurses, Nursing Times has been told.

Nurses gathered in their hundreds today outside St Thomas’ Hospital in London, as part of the Royal College of Nursing strikes taking place today.

Hannah Peters, a staff nurse at Guy’s and St Thomas’ NHS Foundation Trust, told Nursing Times that nurses had been “forced” onto the picket line, for not being properly renumerated for the work they did during the coronavirus pandemic.

“We’ve just been let down over and over again by the government – we’ve tried to negotiate with them, they’re not having it,” she said.

Ms Peters said the lack of engagement from the government with nurses about the dispute made it seem like “they don’t care”.

She said: “We’re just saying: listen to us and take our demands seriously, sit around the table with us and we’ll get to some agreement at some point.

“But to not listen to us at all is just a slap in the face after everything we did during Covid.”

Also on strike was Mikko, a wound care clinical nurse specialist, who told Nursing Times that he thought coming to work in the UK would be different, after feeling underappreciated in his home country.

“The reason I am so angry is because I feel that we are going in the direction that we have in the Philippines.

“My anger and my frustration is actually fuelling me to shout more because of this injustice.”

Mikko spoke with passion and upset, describing how the government “don’t understand what nurses are having to go through every day” to try and look after patients’ safety.

Some nurses had joined the picket line on behalf of their colleagues and the future nursing workforce.

Ronke Ajidahun, a haemophilia clinical nurse specialist, said she knew colleagues who are “dependent on foodbanks or have had to take up extra cleaning jobs to make ends meet”.

Ms Ajidahun told Nursing Times that “it is time something is done” about nurse pay, particularly for student nurses coming into the profession.

She said: “I think it is so unfair and bad that students finish [their degrees] and their wages are not even enough for them to survive.

“They are already in debt by the time they graduate, on top of that, not to have enough to live by.”

“We’re angry and distressed, but it doesn’t mean we have given up on the fight”

She told Nursing Times that student nurses “barely survive on what they get”, which was why there needed to be changes “across the board”.

Nurse pay should reflect the fact that nursing is a graduate profession, Ms Sanni said.

“This is a very educated role and they really need to understand that we are allowed to speak and demand for the best,” she added.

Ms Sanni also described how registered nurses were often forced to go beyond what was expected of their role.

She said: “We do the work of a doctor, social worker, a porter, and yet some people can’t meet their rent.

“And then at the same time some, people can’t even strike today, because they can’t afford to miss out on their pay. So we really, really, really need to be heard.”

Ms Sanni was on the picket line with colleague Doris Obijuru, who said nurses had been “tolerating so many shortages of staff and unfair pay”. 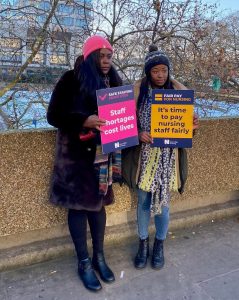 Ms Obijuru said: “To meet with what the RCN are asking for, it’s not really much, it’s just [for] being able to survive, being able to pay your rent, pay your bills and just live.

“We really do hope that they meet us in the middle.”

Joining RCN members on the picket line were nurses belonging to unions which did not obtain a strike mandate in London, such as GMB and Unison.

Janet Maiden, a deputy sister and Unison chair at University College London Hospitals NHS Foundation Trust, said she was “totally amazed and in awe” at the number of RCN branches that had achieved the 50% turnout threshold required in a ballot for a lawful strike.

Although she added: “I don’t think it’s surprising, there is huge anger.”

Reflecting on the fact that Unison only achieved a mandate at two hospitals in England, Ms Maiden said nurses “are genuinely gutted and devastated”.

She said: “We’re angry and distressed, but it doesn’t mean we have given up on the fight… that is why we are supporting things like this today.”

More coverage of the RCN strikes

Doctors Told Her She Wouldn’t Live Long, So Her Medical Team Helped Her Get Married in 12 Hours – Scrubs

CQC nursing staff to be balloted on industrial action over pay