Nurses standing on the picket lines in Northern Ireland this month experienced a “heart-sinking moment” where they could not believe they had been “forced” to strike for the second time in just three years.

Nurses across all 11 Health and Social Care (HSC) employers in Northern Ireland took to the picket lines on 15 and 20 December as part of an ongoing dispute between the Royal College of Nursing and the government over pay.

Chair of the Royal College of Nursing’s Trade Union Committee and a registered nurse in Northern Ireland, Denise Kelly, said the mood among the profession was “very solemn and sombre”.

Nurses in Northern Ireland successfully took to the picket lines in 2019 to achieve pay parity with colleagues in the rest of the UK and a plan for safer staffing.

Ms Kelly, who has been a nurse for 30 years and is on the union’s strike committee, described what it was like for nurses at the Northern Health and Social Care Trust striking for a second time.

“[There] was a heart-sinking moment where people thought ‘we cannot believe that we are having to do this again to try and demonstrate our worth and to try and get the government to listen to the voice of nursing’,” she told Nursing Times.

Denise Kelly (right) with a colleague

Nurses had been “forced into this situation” and had “reached crisis point”, she warned.

But the profession was also “determined and resolute” and was “doing this for our patients and for the future of our profession”, she added.

And according to Ms Kelly, many more nurses had come to support strike action this time around.

Nurses working for HSC in the country are still waiting for the government’s £1,400 increase to hit their pay packets, following several months of delays because of political turmoil there, she said.

From her experience working as a frontline nurse in a large hospital in Northern Ireland, she said “this summer was our worst winter”, in terms of “patient acuity, how busy it was and our lack of having adequate staffing in every department”.

“We’re just so concerned about our patients and the level of care they are receiving,” she told Nursing Times.

“But also, the moral injury that is having on nursing staff as well.”

She explained how every shift she worked was short staffed, and described how she would frequently “go home worried” for her patients and colleagues.

“From a personal perspective, I feel like I firefight every single shift,” she added.

Ms Coulter told Nursing Times that nurses had been “overwhelmed” with support from the public and colleagues on both strike days, and some members of the public had bought gifts to show their appreciation.

Nurses were even presented with a board of notes from the public saying “how much nurses were valued and how much people appreciated the NHS”, she said.

One note read: “So sorry you have to fight for pair pay you so deserve.”

Meanwhile another note from a student nurse said: “You are our heroes, you deserve much. 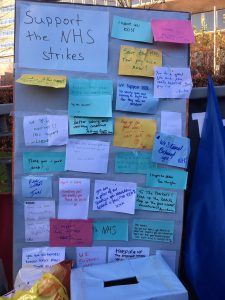 Messages of support from public in Northern Ireland

“Thank you from your student nurses who aspire to be as courageous as you.”

For Ms Coulter, nurse vacancies in Northern Ireland were one of the main reasons she and her colleagues had taken to the picket line, citing the 2,493 nursing vacancies in the HSC and similar number in the independent sector.

Additionally she warned that the Department of Health in Northern Ireland’s eight-month delay in confirming a pay offer threatened to push nurses to move to other countries for work.

Ms Coulter said: “It’s not that big a difference to travel from Northern Ireland to England or Scotland or Wales, and our concern would be that we’d have staff moving because obviously they’re going to get better pay over there.”

Rita Devlin, director of the RCN in Northern Ireland, echoed similar concerns, noting that almost 3,000 vacancies in a small country equates to “about one in ten vacancies”.

“We are struggling at the minute to have the nurses to meet the demand that is in the health service at this current point in time,” she told Nursing Times.

Ms Devlin added that while Northern Ireland faces the same pressures as other UK countries, “they are magnified” as it is a smaller place with fewer hospitals for people to go.

The difference between the strikes in recent weeks compared to the ones in 2019, is that the system “is in a dire state 10 times worse than before”, she warned.

Ms Devlin called on ministers across the UK “to show some political leadership” and engage with the RCN.

She added: “They need to enable the health service in Northern Ireland to have the root and branch transformation that it needs to have, to be able to deal with the increasing pressures and to try to deliver better care to the public.”

“No is not an option,” she said. “If you can’t afford a 19% pay rise, then get into a room and tell us what you can afford, make an offer that we can put to our members.”

This is How I Became A Nephrology Nurse (Podcast)

“Winter of Discontent” as U.K. Nurses and Ambulance Crews Walk Out – Scrubs