Pay for nurses has failed to keep up with the ever-expanding role of these professionals in services, experienced nurses on strike in Liverpool have warned.

Intensive care unit (ITU) sisters Louise McCarthy and Carolyn McGuigan, who have both been nursing for 20 years, said current pay levels do not recognise the “skillset” of nurses today.

The pair spoke with Nursing Times from the picket line on Wednesday, as part of strikes organised by the union Unison over poor pay and working conditions for NHS staff.

More from the Liverpool strikes

Ms McGuigan said: “Our role has expanded so much, all the equipment that even from when I started we wouldn’t have touched, they were doctors’ remit. They’ve pushed all that over to us.”

Her colleague Ms McCarthy then added: “But your pay hasn’t reflected that, that’s the main issue.

“You’ve taken on so much responsibility but yet your wages aren’t keeping up with just the cost of living.”

Ms McCarthy added: “I think as well, because you are in a healthcare profession, you are literally saving people’s lives and for people to go to uni for three years and do the job that we do, it’s a lot of responsibility.”

The pair said many nursing staff were “scarred” and had post-traumatic stress disorder from the Covid-19 pandemic and that severe pressures were still continuing.

Explaining why she was striking, Ms McCarthy said: “It’s not just about the pay, it’s about patient safety, patient care.

“There’s many of us here that on a daily basis you are staying well behind your shift, you are looking after more patients than what you should be, you don’t get your breaks.

“Especially after Covid as well, it’s had a lot of stress on all of us and we’ve had enough and we just feel like our voices aren’t getting listened to anymore. So, this is the last resort for us, to do this.”

Ms McCarthy said herself and other equally experienced colleagues were now considering leaving nursing because of the pressures and pay.

She is a single parent working full-time as a nurse and said she was needing to rely on her parents to provide childcare and having to take on extra bank shifts just to cover her bills.

The pair both said they would strike again if required to achieve a better deal for nursing.

Similarly, Laura Manning, also a staff nurse in ITU, said she too needed to take on extra bank shifts just to pay her bills.

She said she had felt “guilty” about going on strike but that she was doing so for patient safety and the future of the NHS.

“It’s not just about pay, it’s patient safety, and it’s just about being recognised for what we are actually doing,” Ms Manning told Nursing Times.

Shaun Lever, a nurse lead working across two services in Liverpool, said he was striking as a “last resort”. 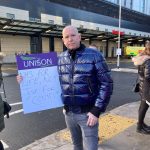 “I’ve been in the NHS 27 years and I never ever thought for one second it would come to this,” said Mr Lever.

He added: “What we are seeing around staffing and the motivation and the value of some of the nurses is beyond belief. It’s shocking.

“So, it’s with a heavy heart that I’m here and I genuinely apologise if it’s affected anyone and I know it will.

“But in the long run hopefully we will have a better NHS that is better staffed and better valued.”

He said he hoped fair pay would not only improve recruitment into nursing but retention too, noting that the NHS was currently “haemorrhaging” staff. 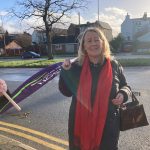 To the government, Mr Lever urged it to be “flexible” and to get around the table with unions to negotiate on pay.

Margaret Balmer, recovery unit nurse, who has been in the profession for more than 30 years, said the fact the government was refusing to negotiate sent a message that “they do not value nurses at all”.

“We all went the extra mile in the pandemic and we were expecting at least some respect and consideration from this government and we’ve had nothing,” she said.

Staff nurse Jo Kavi, who attended the strike with her young daughter, urged the government to “act fairly”.

“We are not asking much, we are just asking for a daily living,” she said. 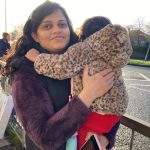 Meanwhile, Dawn Lacey, who has also been nursing for three decades and works in critical care outreach, said NHS staff were striking because “we can’t tolerate the unsafe standards anymore”.

“We are all workers in the NHS, it’s getting much more stressful, and we are not just workers we are all potential patients as well, and so are our relatives,” she said.

“We’ve just got to protect our healthcare for the future and I’m getting scared that it’s not going to be there.”

Ms Lacey also raised concern about retention and said the pressures and short staffing were affecting the ability of staff to access training and development opportunities.

“We have just got to make this stance,” she said. 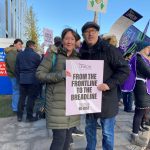 “Wages, definitely for the more junior nursing staff and other healthcare professionals, needs to increase to maintain these very well-educated professionals.

“Because obviously they are leaving for better paid jobs with less stress.”

Peter Brown, charge nurse in critical care, said the NHS was “struggling”, staff morale was lower than ever, and he believed “enough is enough”.

The two Liverpool trusts were the only hospital trusts in the UK that achieved a strike mandate in the Unison ballots.

Asked why he believed strikes were happening in Liverpool, Mr Brown said: “Liverpool has always been a strong union base… We stand up for not only ourselves but also for other people.”

Answering the same question, A&E staff nurse Joanne Gardner,said: “We are the working class. We’ve always had to fight for what we’ve needed.

“For my whole life I think that’s what we’ve been brought up to be, fighters. So, I think we know what we need to do.”

Joe Baldwin, chair of the Liverpool Hospitals Health Branch, told Nursing Times that the turnout to the strikes was the best he had seen with 500 staff at the Royal Liverpool University Hospital picket line alone.

He said the NHS was run on goodwill and it was clear that staff had “absolutely had enough”. 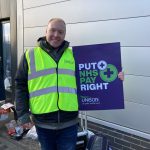 “We’ve got staff nurses who have been qualified for a year, two years and they’ve left the profession because they can’t cope,” he said.

“When you’ve got junior members of staff, all those clinical decisions that they need to make, and they’ve got nobody there to ask for help. It’s soul destroying for them.

“I’ve witnessed it when I went into A&E and I’ve seen senior sisters sliding down the wall in tears because they can’t cope with the pressure because of the critical incident level and things like that.”

He added: “I applause each and every one of the members and it’s not just about the qualified nurse or the healthcare support it’s about the domestics or catering staff or porters or security because without these the NHS wouldn’t be able to run.”

In the new year, Unison will begin to reballot staff in 11 NHS organisations where a strike mandate was almost achieved during the first vote.

Unison has also announced that ambulance staff across five services in England who went on strike this month at the same time as the Liverpool workers will take part in two further strike days on Wednesday 11 January and Monday 23 January 2023.

The union told Nursing Times that there would also be further strikes at Liverpool University Hospitals and Liverpool Heart and Chest Hospital, but dates were still to be confirmed.

“While union members will not be going ahead with strikes over Christmas, we are disappointed they have announced further co-ordinated strikes in January to cause maximum disruption at a time when the NHS is already under extreme pressure.

“Ambulance staff on picket lines have been raising concerns about working conditions and handover times, so it is important to use this extra time to keep talking about how we can make the NHS a better place to work. However, the unaffordable pay demands of unions would mean taking money away from frontline services and cause further delays to care.

“Strikes are in no one’s best interest, least of all patients, and I urge unions to reconsider further industrial action to avoid an even greater impact on patients.”

4 Things That Need To Happen To Keep Nursing Afloat