Mental health nurses are struggling to give care to patients in rural areas due to the cost-of-living crisis and record staff vacancies, Nursing Times has been told.

Staff from Norfolk and Suffolk NHS Foundation Trust, a mental health trust, gathered outside Hellesdon Hospital in Norwich today as part of the second wave of Royal College of Nursing strikes taking place across England.

Mark Randall, a community mental health nurse, told Nursing Times that this was “the hardest [he has] ever known” his job to be.

As a part of a team that cover rural areas in north-west Norfolk, Mr Randall described how the rise in fuel prices had affected him and his colleagues.

He said: “I think cost of fuel is a big issue, like the mileage rates and stuff hasn’t kept up with the increases in the cost of petrol.

“So it’s becoming harder really for people to do the job and it’s having an impact on people.”

At Hellesdon Hospital, Mr Randall noted that there was now a food bank for staff to use.

He said: “When I qualified I would have thought that would have been an impossibility, I’d have never seen that happening.

“I think it just goes to show how bad things have got really, that the food bank is needed and it’s used.”

Mr Randall added that he would continue to strike until nurses win the dispute over pay: “The message really to the government is that we’re not going to stop this until we get a fair deal.”

Ms Dymond told Nursing Times that she was on strike because she is “passionate about the NHS”.

She said: “It’s about protecting the services, it’s about recruitment of new nursing students, it’s about retaining the people who are here and keeping the nurses who we’ve got.

Ms Dymond explained that while staff shortages were everywhere in the NHS, there was a significant number in the region.

She added: “There’s open vacancies in every team I know of.

“Once upon a time that wasn’t the case, you couldn’t get a job as a nurse [because] all the positions were full but they’re not full anymore.”

While all areas have been impacted by the crisis in the NHS, Ms Dymond noted that more remote areas had been “particularly affected”.

She said: “Rural areas are affected because of the cost of living and transport and being able to get to appointments that people need to get to.

“But also as community nurses, our mileage money hasn’t increased.

Ms Clarke, who is part of a team which covers the whole of the county, explained that there were a number of vacancies within her wider teams, and that they were finding it “exceptionally hard” to fill the roles and retain staff.

She said: “It’s a really hard job. We’re managing lots of young people who are really high risk and that’s a huge amount of responsibility, and people aren’t getting paid enough.”

At present, children and young people can wait up to two years to be seen by specialist mental health nurses in Norfolk, Ms Clarke explained.

“It was pretty bad before Covid, but then Covid struck and it just got worse and worse,” she said.

“Over that time I would say the impact on young people has been huge, and then obviously we can’t meet the demand of the service because of lack of staffing and also the skills,” Ms Clarke added. 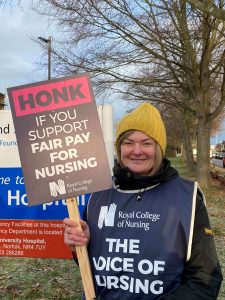 She told Nursing Times that she currently did not have enough nurses to meet the demands for the servive.

Ms Grove added: “People are waiting to be seen who are mentally unwell so obviously their risk goes up.

“Nurses are being burnt out from the job because they’re going above and beyond.”

Ms Grove explained that she was off sick last year due to stress and burnout, and that even when she returned “nothing had changed”.

“I’ve just had to change my attitude so that I don’t become unwell, and keep inspiring other members of the team to keep working,” she added.

Joining her colleagues on the picket line was Esther Smith, a mental health nurse at Hellesdon Hospital.

Over the last seven years at the trust, Ms Smith said that she has noticed that it had become harder to retain staff due to issues with pay and stress.

She said: “We want fair pay, we want staffing, we want our service users to be safe because we [have] got a duty of care for them, to safeguard them, to protect them – but every day we are short of staff.”

Ms Smith added: “Until our voice is heard we will continue, we will never give up [and] the struggle continues.”

Ask A Nurse: I Want To Become A Nurse But Am Starting Later In Life. Should I Become An LPN And Then An RN?