Nursing associates in the county of Norfolk have warned that they will “break” if their working conditions do not change.

They gathered on the picket line alongside their nurse colleagues at the Norfolk and Norwich University Hospital, on the second day of the Royal College of Nursing’s January strikes.

Rebecca O’Hare, a registered nursing associate on a respiratory ward, said she was struggling to give people proper care because of the pressures she was under.

“It’s so demoralising, so deflating, when you can’t give people the time of day that they need and that they deserve,” she said.

Before qualifying as a nursing associate, Ms O’Hare worked at the Norfolk and Norwich University Hospitals NHS Foundation Trust as a healthcare assistant (HCA).

She told Nursing Times that the changes she had seen over the last seven years at the trust were “unacceptable”.

Ms O’Hare described having to cram patients in wards “like sardines” and how patient safety was being compromised every day.

She added: “The government needs to take accountability for their actions, for their chronic underfunding, for getting rid of the bursary for nurses and they need to pull their finger out and take action.”

Ms O’Hare finished her training just last year and said at times she was finding it “really hard” to manage.

She added: “I’m at the start of my career and I will break if this doesn’t change.

“I’ve had my PIN for three months and just last weekend I had a couple of shifts where it really did just break my heart.”

Penny McGonagle, also a registered nursing associate who is doing a top-up degree to become a nurse, told Nursing Times that her training had been impacted because of short staffing.

She said: “When you go on placement, there’s not enough nurses on the ward for a start.

Ms McGonagle said sometimes she had ended up working with HCAs and having to “help them out” instead of being trained herself.

She said nursing staff needed to “continue on and strike” and gather the support of the public.

“When we stand united together, hopefully the government will listen,” Ms McGonagle said.

“They need to listen or they’re going to end up losing really good nurses,” she added.

Critical care staff nurse Paige Small explained that her training was also impacted by short staffing during the coronavirus pandemic.

In the last six months of her training, she was called to the frontline to work, which she described to Nursing Times as “hard, depressing and bleak”.

Ms Small said: “Every day was just people dying all the time.

“I’ve seen way too many deaths in just two years [of] being qualified and I don’t want that to continue.”

Ms Small explained how nursing required “a bit of immunity to sorrow”, which she thought many graduates since the pandemic had been unable to build due to the severity of what they had experienced on the frontline. 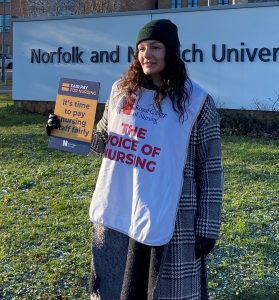 She said: “It’s detrimental to my wellbeing, absolutely, [because] you can’t leave it at the door.

“Not everyone has built up that resilience and are able to detach and go home, I take it home all the time [and] I often have little breakdowns to my partner.”

Like many others, Ms Small is calling for her pay to be in line with inflation, and for safer staffing levels to protect patients.

She said: “We’re not heroes, we’re not angels – we’re degree-educated people who know what we’re doing.

HCAs were also joining their nursing colleagues on the picket line in Norfolk in the fight for pay and safe staffing.

Ellen Nierop, an HCA in oncology and haematology, told Nursing Times that she was “really concerned” about the new proposals from the government to implement minimum service levels during industrial action in the health sector.

She said: “The concern is that the government will introduce the safe staffing levels [but] we don’t have that on a regular day anyway.

“And then they will remove the right to strike from nurses, because they will insist on more staffing levels than we normally have, and that will take away our voice entirely.”

Ms Nierop said that she had heard managers put in requests for staffing levels to cover the strike which were more nurses than were on the wards day-to-day.

“I heard somebody say they were asking for six nurses to staff a ward when normally they only have three, and that is because we are just always operating under safe staffing levels,” she said.

HCAs “are working in such terrible conditions”, and were paid so little, that they were considering leaving the profession, Ms Nierop warned.

“I could earn a lot more than what I am earning working in Aldi,” she added.

“But I’m a person who cares and who wants to look after people and I feel like I’m being punished for that.”

He noted that there were “tried and tested plans” in place to deal with the disruptions facing patients, and that key services had continued to operate.

Mr Cobb added that during industrial action, the trust needed to reduce the number of appointments it had planned, in order to maintain emergency and life-preserving care.

These appoints would be re-arranged “as quicky as possible”, he said.

He added: “While pay is a matter for government and the trade unions, we value our staff and want to see a resolution as soon as possible.”

Exclusive: RCN chief urges ministers to ‘get a grip and negotiate’ on strikes eve

“A Tragic Day for Nursing” – Scrubs